January 17, 2021
An anonymous salary survey has been conducted annually since 2015 among European IT specialists with a stronger focus on Germany. This year 1238 respondents volunteered to participate in the survey. Certain parts of this analysis will refer to previous year's results. Thanks to everyone participating!

Compared to the last year, the number of respondents increased by a quarter. In this analysis, "Salary" means gross annual salary in thousands of euros (shortened to k), including all taxes. The base salary (i.e. excluding bonuses and stocks) median in 2020 remained almost the same as in 2019 - 70k. The line charts below from last year's analysis were extended with the data from 2020 and represent respondents' number along with their median annual base salary by years.

The purpose of this survey is to learn a competitive value of a skillset for IT specialists depending on: years of experience, position, languages, etc. in Germany, though this year 9% of the respondents were outside of Germany. The market value largely depends on numerous economic factors, which vary from country to country. To gain more accurate salary statistics, we'll avoid comparing the same skillset values across different economic markets. More than 91% of respondents are from 45 German cities. Below you can find a comparative analysis of the aggregated responses provided by participants from Germany.

The share of women among respondents grew by 0.3% since 2019 and 0.8% since 2018. According to the collected data, the difference in median salaries of men and women is around 18%. You can find out more about the pay gap in a survey by the Statistisches Bundesamt based on the employees' payrolls of approximately 60,000 companies randomly selected across Germany. They estimated the average pay gap to be at 19%.

Top cities by the number of respondents: 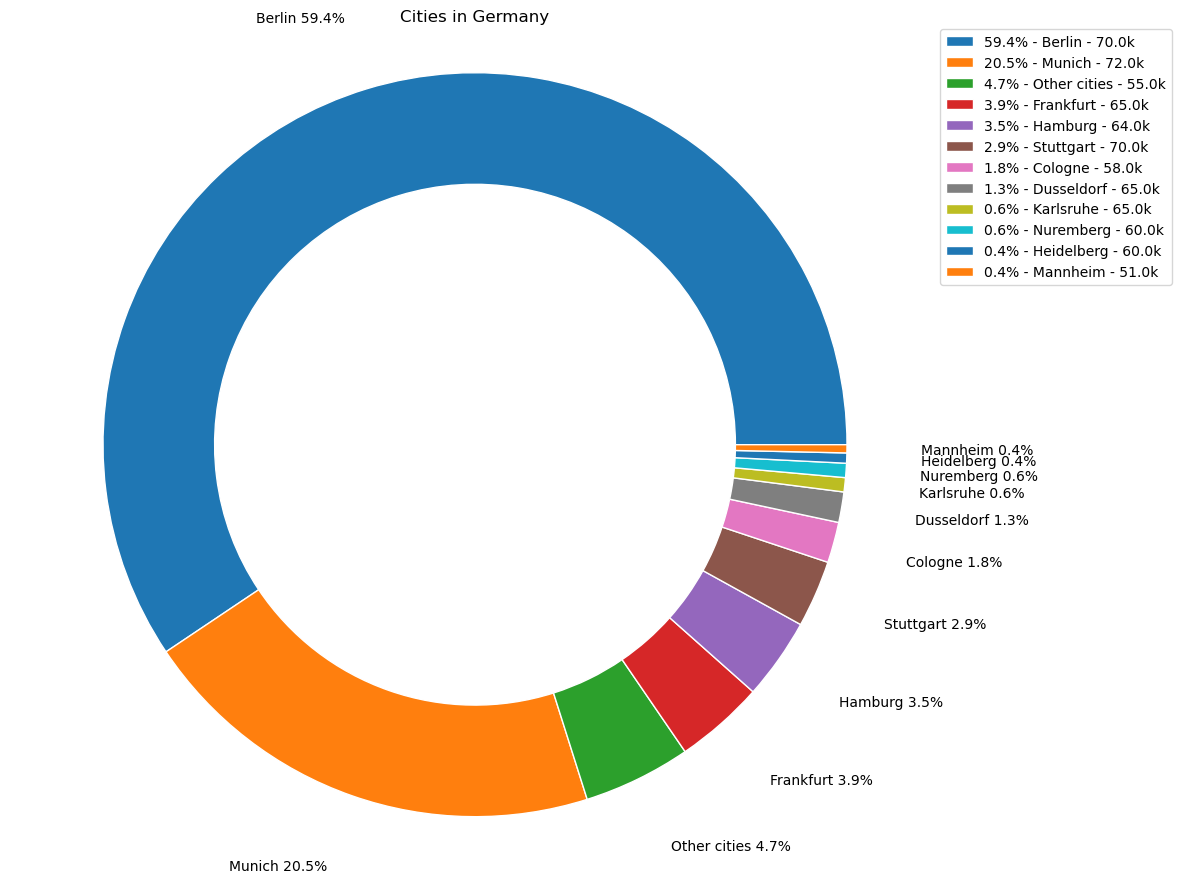 Median annual salaries in Berlin and Munich are 70k and 72k respectively (same as last year).

Like last year, the survey showed that most IT professionals speak English at work. But, now, this tendency prevails also in German consulting. It also holds for other types of companies in Germany (product companies, startups).

45% of respondents have 30 vacation days.

Employment status of the respondents

Freelancers make up less than 2 percent of respondents.


Median salaries (EUR/year) of IT specialists in Germany

Respondents hold a wide variety of positions in IT, e.g. Agile Coaches, SAP Consultants, Researchers, Product Analysts, etc. In the table, you will find the Top positions mentioned by at least 5 respondents. Medians of total compensation (i.e. base salary including bonuses and stocks) are counted separately for full-time employees including founders and freelancers (the last row in the table).


The salary by total years of experience

Another important exploration point is how experience affect the annual salary of the respondents. For our analysis, we'll use Software Engineers (Full-time) since it is the most common position among respondents. The graph above shows the median salaries of respondents with a particular work experience. Those very new to the tech industry, with less than a year of experience, can expect to earn 45.5k euros. With every next year spent in the industry, the annual compensation grows logarithmically (with some slowdown around the 10-years mark). Only 30% of Software Engineers (145 respondents) have more than ten years of total experience; that is not enough to speculate about a solid salary trend. A point worth mentioning here - for people with over 20 years of experience total compensation might not be of the utmost importance, as the chart goes down.

Both scatterplots are based on Top-13 full-time (+founders) dev&tech positions' salaries. The upper one shows bare salaries on total experience and seniority level without bonuses and stocks, the lower one - with it. The overall medians for Dev&Tech positions (means Devs, Engineers, DevOps, Product Managers, Analysts, QA, etc.) is equal to 70k (the same as last year).

For positions at different levels:

Shares of respondents by technologies

The most popular programming languages among the respondents are Python and Java (same as in 2019), followed by JavaScript and PHP. Many respondents use JavaScript along with TypeScript, which itself ranks 6th in popularity with 3,5%.

Docker proficiency seems to be the most common in addition to the principal working language/technology. As for a cloud solution, AWS is more popular among the respondents than Google Cloud and Azure.

The 31 box plots represent base salary distributions of specialists in Berlin by the 31 the most popular technologies & programming languages.

For example, the median annual base salary of Cloud Engineers and Spark specialists (light green and pink box plots respectively) are superior to salaries of professionals in other technologies. The annual salary of Java developer has a distribution centered around 70k/year with many deviations towards significantly higher salary values. The engineers using Python are being paid around 68k/year, the salary distribution stands out by the highest standard deviation, which tells about a wide span of salaries.


Distribution of base salaries and total compensation

Among 1127 respondents who work in IT and live in Germany ~70% specified their last year's salary in the current survey. The above box plots compare annual salaries with bonuses and stocks and without in both years:

The insights of these dynamics over the 2015 – 2019 period is described in the previous report here.

The brightest curve corresponds to 2020. The standard deviation is quite high due to a fairly wide sample of respondents. The distribution mode has shifted slightly to the right and kurtosis has become slightly higher compared to the last year. It means that the most common base salary has became higher but the number of people receiving it has decreased. The distribution is right-skewed.

Total compensation in the most represented German cities

Traditionally, the focus is on the most represented cities of Berlin and Munich. In general, the two distributions are almost aligned like last year. From the rug plot below, the left tail of Berlin's total compensation distribution is heavier, which implies more respondents with a compensation below average. There are significantly fewer respondents from other cities so that it's hard to derive statistical inferences. Nevertheless, the common annual total compensation in Hamburg as of 2020 is around 60k, in Stuttgart - 62k. Although the bell of distribution in Frankfurt is close to Berlin's one, the overall distribution is quite left-skewed, this tells about a few very high compensation alternating with many regular/below-average compensations.

21% of respondents have received Corona-related financial support from their employers. In most cases, it was one-time support within 500 and 1500 euro net. In some cases it has reached 2 000 - 5 000 euro, the maximum sum reported being 10 000 euro.

Thanks to Viktor Shcherban for working on previous salary surveys with row datasets (2015, 2016, 2017, 2018, 2019) as well as publishing this analysis based on collected in 2020 survey responses.
Thanks to Sergey Vasilyev for collaboration on survey questionnaire and review of the article.
Credits to Irina Shakhova and Ilya Nikokoshev for valuable comments.